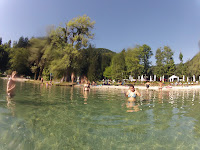 We left Ljubljana after three days and made our way to Lake Bled which is only a 45 minute drive away, so easy peasy! When we got to Lake Bled it was rammed and people were being turned away unless they had a reservation. We didn’t. Luckily we stuck around an extra few seconds after being told that there were no spaces and, due to some eavesdropping, we discovered that at the far end of the campsite there is a ‘free-for-all’ camping section, and if you find a space you can stay for as little or as long as you want. So we sped up to the back of the campsite and started looking, the catch was that due to this free-for-all mind-set there were campers everywhere, and some were not in the most rational spaces and others showing creativity at its best. And on one side of the road there were electricity boxes but not on the other, we, of course, landed a space on the latter. Fortunately for us, our electricity lead reached all the way to the box so Bert the Merc was lit up and ready for us! We went out into the lake as soon as we could and was absolutely gobsmacked at how beautiful and clear it is- not smelly or dirty at all, which can be the case with Lakes. Bled Island is in the middle of the lake and roughly 800 metres away from where our beach was, so after a swim with the fish we grabbed the kayak and crossed our fingers that this kayak experience would be more successful than the last! 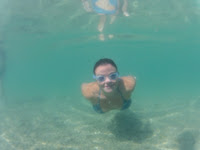 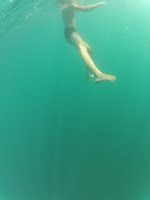 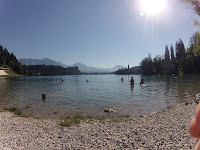 We were very pleased and somewhat relieved when we felt the huge difference between kayaking in the sea to on the lake, we actually had some control and weren’t fighting for balance every few seconds! We kayaked around the island and could see that many people either kayaked or rowed or got the little ferry across to the island, but some swam! We could see other people had kayaked over and had taken their kayak out and tied it to a tree instead of leaving it in the water and so we knew that next time this is what we would do (the only reason we didn’t do it the first time was because we were in our swim gear and didn’t have a towel, or water and no clothes to wear), there is a church on the island so we planned to come back the next day with our lunch, and some clothes to wear in the church, and enjoy exploring the small island! After circling the island we started to head back to shore. 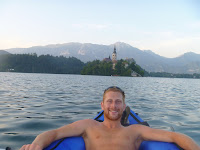 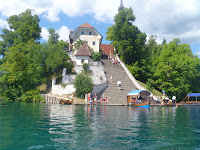 The next day, after our morning swim, we grabbed the kayak again and decided that this time we would kayak around the whole lake, including a stop at Bled Island. The island was great, we locked the kayak up and walked up the stairs to the church to see the sights- which were awesome! We had our lunch and an ice-cream at top, where you can really see all the different colours of blue and green of the lake. Truly beautiful. We walked the perimeter of the island and pinned up across the perimeter are photos of creatures that have been found in the lake, like pikes, giant snails, catfish, crayfish and carp to name but a few! While walking around and swimming in the shallows it is easy to spot the families of fish, all different shapes, sizes and colours. 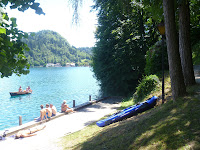 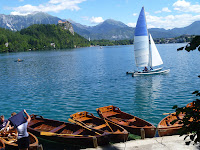 We then started to kayak toward the direction of Bled Castle which is high on a cliff side, overlooking the lake, and kayaked past the restaurants and bars to a small green which we sat to get some shade and to gulp down our water- note to self; do not kayak to the other side of the lake throughout midday as you have to kayak back! We had a bit of a break and stayed in the shade after a bit of a dip, and then made our way the other way around the lake and island! It really was a great day out on the lake but we did ache afterward!

Later on that day we were walking from Bert the Merc to the shop, which is inbetween the beach and campsite enterance and offers a lot of different food at a good price (best campsite shop we have come across!), when we saw a sign, a very familiar sign. And then two people of whom Steven is very familiar with. Adam and Sophie- from Europe by Camper! For those of you who do not follow other campervan related blogs then you will not be familiar with this couple, but these two are very popular in the campervan community and even have their own business which sprouted when they were away, which surrounds motorhome wifi. Plus they don’t have a house but live in their campervan full time! Anyway… so, we saw them and started chatting and have been taking them out with us on our morning swim and been having bbq’s and drinks in the evening with them for the last few days. It’s a small, small world! 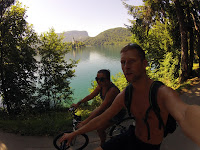 After kayaking past the castle we decided that on one of our days here we would cycle up to the castle and see the famous sights of Lake Bled from all the way up there- if you ever get the chance to go and you are mainly concerned with the views (which are breathtaking), which is what we wanted to go see as the exhibition in the Castle had poor reviews on Trip Advisor and costs 8 euros to do. We did not go into the castle but walked through the car park and up a small footpath to the right of the castle and kept going up and up and got these photos. For free. So the choice is yours but atleast it will be an educated choice! 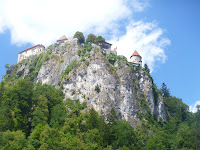 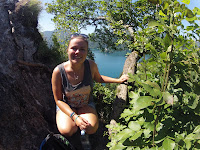 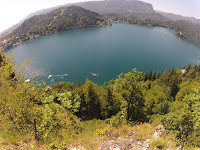 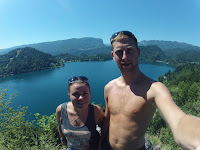 After the climb to the castle and the views we headed back down and met Adam and Sophie at a pizzeria called Rustica Pizzeria which is a little further round the lake, and past a church, (we thought we had gone the wrong way) but it was a lovely little pizzeria and the food and service was great!

Steven and I, then cycled the rest of the way round Lake Bled, which was a nice bike ride and collapsed in a heap by the lake for a bit of sunbathing and swimming. For some reason, the next day we decided that because we had cycled around the lake and kayaked around the lake, that the next thing to do was to swim to Bled Island and back again. We obviously weren’t sore enough! It wasn’t a difficult swim but it was far, the best thing is looking underwater and seeing Steven swimming and then all around him is just blue. It isn’t murky or dirty, just blue. The water was calm but when we got to the island we were shattered, but it only took about 15 minutes to swim across, but it is fifteen minutes without any rest- no side or wall to touch or have a breather on, so we were pretty tired when we reached the island! We had a bit of a rest on Lake Bled Island and then jumped back in! The swim back was harder but that was because we were tired, but still only took about 20 minutes, for the rest of the day however, we were good for nothing!

We also went out for a meal with Adam and Sophie as well as Steve, Mandy and their daughter, Melissa; Steve and Mandy also have their own business selling books on where to stay for free in Great Britain called Brit Stops. We all went out for a meal on Lake Bled at a restaurant called Vila Preseren which served great food at reasonable prices- I had stuffed squid and Steven had a mixed grill platter- yummy!! 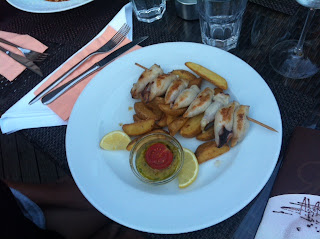 The great thing about Lake Bled in Slovenia is that it is beautiful and there are loads of things to do, but that isn’t just in the summer, in the winter Lake Bled freezes over and there are photos of people walking across the frozen lake! Skiing and snowboarding are very popular here too as it is very mountainous, and the people are so friendly and the costs are low! It is perfect! Tomorrow we leave for Zagreb, the capital of Croatia, on our way to Serbia. And we will be sad to leave here after 9 days! But we do know that nothing could keep us away for good! 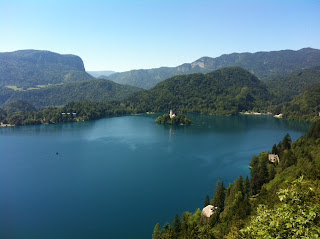 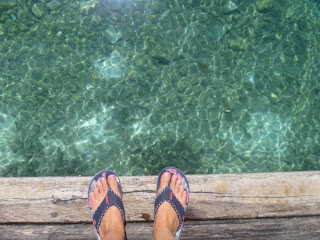 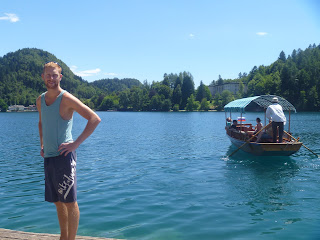 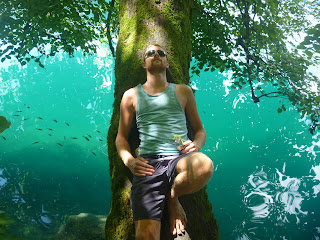 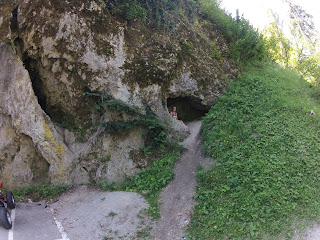