So in our last blog we had crossed the border into Croatia and were due to meet up with my Dad, Caroline and Nick in a couple of days time, so found a small but beach side campsite ten minutes away from the airport that my family were arriving into. After the monumental rain in Montenegro we found sun in Croatia and spent the rest of the day climbing the rocks and paddling around before some rather bleak clouds started roaming in on us again.

It began to rain but not too heavily so we put the kettle on and watched some Breaking Bad and then went to bed. A few hours later we were woken up by Bert the Merc Swaying- yes, swaying, and a drip drip drip of rain leaking through our closed roof vents, followed by a mighty crash of thunder swifty followed by a flash of white as the sky lit up. We jumped out of bed and scrambled to put the awning away, which Steven had cleverly tied down and so was still attached to Bert, we then watched the sky for a bit. It was about 2am and the storm was all around us, the most impressive was the fork lightning which was dancing on the horizon, over the sea. We got back in Bert the Merc but due to the loud rain, wind and thunder we couldn’t sleep until it started to pass by 5am. We were then woken up again at 8 am by more storms. To say we were grumpy is an understatement. We were trapped in Bert for most of the day as the storms came and eventually went. We had another storm the following night but was nothing in comparison and so we slept throughout the night, which was fortunate as we were up early the next day to go meet the family at the airport!
After an emotional and excitable reunion with the family we headed to their apartment for the week which was in Cavtat.

Cavtat is a beautiful place and tourist friendly with loads of places to eat and drink and lots to do, without it being tacky. I would strongly recommend this holiday to anyone! We hired a pedalo for an hour twice in our week, hired a paddle board and a boat during our one week stay in Cavtat! It was brilliant! We also got the taxi boat over to Dubrovnik from Cavtat  which cost about 8 euros (400 Kuna for 5 of us) each for a return ticket and the taxi boat took about an 40 minutes each way! Dubrovnik is well worth a visit as it is so interesting and historical. We spent the whole day there and even saw someone get married! You can walk around the old city walls for 11 euros each and is well worth it! Its a long walk with loads of cool sights and photo opportunities- do it!!!

The beaches and water quality at Cavtat was very high and we would often see fish when swimming, there was no litter and everyone was really friendly. There were some cracking restaurants around the area too and a great dock which also hosted a many large and beautiful boat! How the other half live eh?
Croatia has over 1000 islands and we went to one with the family via our rented boat, and Steven and I got a ferry over to a larger island once we had moved on from Cavtat. We got the ferry from Drvenik to Hvar which was pretty cheap (25 euros for us and Bert) for a half an hour ferry ride. The only catch is that once you get to Hvar you have to drive to the other end to get to the beautiful beaches, from our AA map the road looks relatively straight and so shouldn’t take more than half an hour. Two hours later… yes, so the ‘straight’ road wasn’t so much straight but more a squiggly coastal road with some rather questionable road surfaces and driving techniques. It is safe to say all our pots and pans got a nice wake up call and rearrangement along the way!
Needless to say, there are some lovely views and campsites in cracking spots but beware that everything is a lot more expensive to the mainland. One night on a campsite is a minimum of 25 euros a night (leaving us with 5 euros to spare a day), there is a ferry from the north end of Hvar to Split but this was going to set us back 75 euros. We had a nice stay there but the weather wasn’t great and it was kinda out of our budget so we left after two nights, but if you have a larger budget than us then it is worth a visit as you can at least tick one of Croatians islands off your list!

Next we headed to Split, which was a great day out, we got the bus in which was really easy and the best thing to see was the Cathedral of St Domnius and Diocletian's Palace. Lonely Planet talks about Ghetto Club as a place to go for a drink but we couldn't find it and there are loads of places to go for food and drink in Split, and the layout is all quirky with loads of little secret alleyways and cool places to find! Our day visit to Split was enough for us but I can imagine that staying in that area would be lovely as its by the sea and has so many cool cafes and shops that could keep some people occupied for days!

That evening we had a humongous lightning storm, it was completely silent and something that we have never seen before and continued for over an hour! It was so surreal and hypnotising.

We then headed up to Krka, one of Croatia's National Parks. We stayed on a campsite about 4 miles from the actual National Park but it only costs 12 euros a night, so a right bargain! We decided to cycle to the national park and it was great- all down hill along this cool mountain road and there were barely any cars so was loads of fun... but of course, in this case, what goes down must come up. It was two miles of complete down hill road and then another two miles of relatively flat forest paths until we got to the entrance of the national park where we dumped the bikes and carried on on foot. The cost is 10 euros each to get into the park and even though thats quite expensive, it includes a lot and the view is just something else! Totally worth it! It is only a one day trip though, which is nice for the old pennies, but it is a great day trip. The main attraction is the tiered waterfalls and you can go in the water which is cool but i would advise to do this last as it does kind of smell pondy... 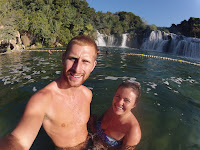 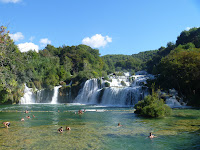 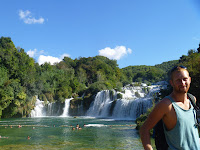 There is a designated footpath all up and around the waterfalls and you can see some amazing views, and there is little information spots about what lives in the national park and bits of little fun facts. If you do go make sure you walk all the way up the top as there is a lot more to see than you think! And you can see where the water level increases in the winter, and you can see the water would flow. 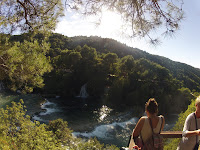 We have been driving along the coast of Croatia today and I have to say that it is gorgeous! There are loads of places to camp too and most of them are practically on the beach! We are just staying over night at a campsite near Rijeka as have a long haul drive tomorrow as we are going to Venice, to start our adventure in Italy! 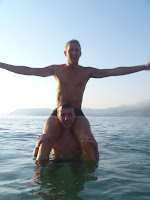 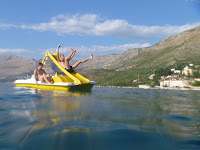