Bonjournio!
Yep, we are in Italy! Our first stop was Venice and we were really excited to go as neither of us had been there and its a bit of a mystery, even when you know what to expect. We found an ACSI campsite outside of Venice called Camping Venezia which had really good toilet facilities and was only a 2.60 euro return ticket to Venice on the bus, which only took about ten minutes and was really frequent- made our lives a lot easier!

Our first venture into Venice showed a very steep learning curve. This was mainly because we got lost, a lot. But once you figure out that there is no right or wrong way in Venice but more of a short or long way! It takes the pressure off and when you don't look at the map but merely meander, you find all the good bits and the secret restaurants and the dirt cheap bars that give you free tapas with every drink you buy, not only the first one! The bar was called Rossopomodoro and was awesome and we managed to find it every time without too much trouble. The H&M, however, was a different story as after practically walking into it on our first day but then wanting to find it on our second day left us circling the same area for about an hour with no luck!
Venice unveiled many secrets and surprises one of which was the happen-stance of being in the same Italian city as this lot

Yes it is the Australian couple we met in Barcelona and stayed with for just under a fortnight! The ones with The Slug?
It wasn't a complete fluke; we have been in contact them since we met them in Barcelona, but we still had to find them in Venice which is pretty impressive!
We really enjoyed Venice and stayed there for almost a week with Matt and Bri in tow and we had a great time. But be warned- it is really really really expensive. For example, the four of us sat at a pretty basic cafe and ordered a few drinks, an ice cream and a plate of tapas and this came to SEVENTY-FIVE EUROS. Steven almost had a heart attack. Well, live and learn. Needless to say, we brought in sandwiches from Bert the Merc the next day. But not all places are ridiculous, the Rossopedro bar for one, and we did go out as a four for dinner on our last night in Venice and that wasn't extortionate and the food was really nice, as was the service.
N.B. There is no point me telling you where to eat or drink (except the Rossopomodoro place as its such a steal, and we managed to find it four times!) as you wont be able to find it anyway and finding the good places, and the not so good ones, is part of the fun!

We also had a gondala ride which was really fun, beware that the water does smell a bit, and saw at least four couples getting married! We dont know if it is because it wasnt baking hot when we were there but the infamous bad smell of Venice... wasn't!

After our few days in Venice we started talking about where to head off next as we were keen to stay with the Aussies for a bit longer and our only proper plans where to be in Rome for October to see my sister and brother-in-law when they get there for their holiday. The four of us decided to head an hour north of Venice and chill there for a bit while our wallets recovered from Venice!
The campsite we found is an ACSI site in Caorle called San Franscesco, it was dirt cheap at 12 euros a night with good facilities, a pool (in high season it has 5 but only one was open when we were there!) and was by the beach! And because it was the end of the summer season it was pretty empty too. We stayed here for about a week, just chilling by the pool or on the beach and getting over excited by the cool stuff they had in the shops- they had a normal food shop and then a camping shop too which had pretty much everything anyone could want!

After this relaxing week, Steve and I headed back down to Pisa and the Aussies made their way to Oktoberfest. The next campsite was a Viaregio campsite was a bit more basic and was more expensive but we both really wanted to go see the Leaning Tower of Pisa which was a half hour train ride away, so we set up Bert the Merc and biked down to the beach and promenade to see where Steven had stayed the last time he had been there, 10 years ago.
The next day we biked to the train station and, after seeing the state of the bike racks, we chained our bikes to a water pipe with Steves tyre off and prayed that they would still be there when we came back. There were two 'Pisa' stops, one was something obvious- Pisa Centrale and the other was a bit more aloof, so we got off the train at Pisa Centrale, finding out later that the other Pisa stop pretty much stopped you 100 metres from The Leaning Tower of Pisa, whereas the Pisa Centrale required a two mile walk to get to said tower. And we didn't have a map. And we were cocky. And a bit stupid, so didn't look at the map outside of the train station but just walked for a bit, and then we figured we must have gone wrong so we walked back to said station to look at said map which showed that we had to walk all the way back again to where we had just been but instead of turning around, to carry on walking. But we hadn't taken a picture of the map so after walking for what seemed like an eternity with our tummies rumbling and our eyes searching, we decided to stop and have some lunch and then carry on our quest. We found this lovely little restaurant which served pizzas so we sat down and ordered our drinks to look up see..... Yes you guessed it The Leaning Tower of Pisa!!!! At last and by mistake! So we had our pizzas (Stevens came with chips on top!?) while looking at the Leaning Tower of Pisa, in Pisa, and it was perfect.

Of course, we then went to take all the cringe worthy but totally necessary pictures when presented with a leaning tower. The tower is in a bit of an odd place, right next to a gorgeous cathedral and kind of slap bang in the middle of normal Italian life, but still an incredible and surreal thing to see! 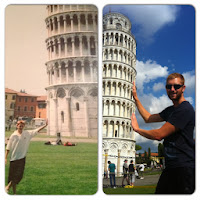 We only stayed at the Viaregio campsite for two nights as once we had been into Pisa and Viaregio promenade we were ready to move on, and the fact that you had to buy little token for the shower (50 cents for 4 minutes) and that a four minute shower was enough so that i was clean but not enough to stay there longer than necessary!
We had less than two weeks before we needed to be in Rome to meet up with Beck and Phill so made our way toward Rome and stopped at a campsite near Follonica. This campsite is really nice and we have been here for a week now, it has a great pool and the weather has been mostly nice and hot too! the one downside is that there is a rather loud train that goes past the back of the site but after a couple of nights you dont even hear it.
It has been a nice and chilled two weeks as we have little to no plans until Rome which we are both very excited to go to for many reasons, and after that we are making a mad dash through Austria, West Germany, Luxembourg, Netherlands, Beguim and then back to Calais for our ferry home! We have three weeks left and we are trying to conserve our pennies for as long as possible so we have as much money as we can to take to Australia in November, which is why the past two weeks have been as cheap as possible as we have a lot to see and do until we go home in all of the exciting countries we hope to visit.

P.S. Here are a few extra photos from Venice, enjoy!