Okay so we aren't actually lost but that song has been in Stevens head since we left Calais!

We are four days in and have been having a cracking time, but have had to come to terms with the fact that there is no such thing as 'beginners luck' for us... Bert suffered a stone to the left headlight on our way out of the UK, we have had a gas leak, and got stung by the Toll Road demons of France all in the first 24 hours.

However we have duct taped Berts poorly eye and magically fixed the gas leak by cleaning a gas valve with the help of a french mechanic, who was also the owner of the first camp site we stayed in, and have learnt how to make the satnav avoid toll roads and we know what they look like on the map now so hopefully we wont be stung again... we have resorted to pasta and beans for the next few days in hope to limit our spending. Scurvy anyone?

Okay, so now you all know we are alive lets get to the details- the first day was a tired, expensive and loooong blur but the camp site we stayed in was beautiful, we have been using the ACSI camping card to find places to stay and the first one was in Bresels- Camping de la Trye, which looked to be a bit of a wild card as even though there was a swimming pool in the photo we are aware that most French campsites dont open their swimming pools until August, and the further description was quite plain. So when we turned up at Bresels we were blown away by the scenery (there was a small stream with a bridge at the far end of the camp site and so many flowers and trees throughout the site) and the facilities were incredible- warm and spacious showers and toilets, the swimming pools area wasn't open yet but it had recently been renovated and looked awesome! And there was a trampoline to play on! We were very impressed but needed to keep moving as the lure of Paris was becoming too much for us :)

The next day we headed off (after the gas leaked was found and then fixed) and ended up in a lovely area on the outskirts of Paris called Maison's Lafitte, where we stayed was on a small island too which made it very exciting, the village of Maison's Lafitte was beautiful and ever so friendly, and where we stayed was walking distance to the train station which was a 20 minute ride to Paris. Sorted.

Paris was brilliant as expected but not as expensive as we had expected which was a result, we left Bert at about 9 a.m. and got into Paris at 9.30 ish and headed to the Eiffel Tower; we even got a discount because we are under 24! There was a strike going on pretty much under and in front of the Eiffel tower about workers rights but that was controlled and we think it resulted in less people being around as we didn't have to queue for a ridiculous amount of time. We then had lunch in front of the Eiffel Tower on the green gardens which was lovely but we were on a mission so started walking from the Eiffel Tower to the Notre Dame! This was long and it was hot hot hot (34 degrees) but the sights we saw made it worth it and it was free... well Emily did need an ice cream at the end but she did share it. Kind of.
The Notre Dame was insanely beautiful and breathtaking and just incredible just from the size of it! Would definitely recommend it and would go in again! we did start to queue for access to the towers of the Notre dame but we waited for twenty minutes without the line moving at all and being about 100 people strong and decided to call it a day and started heading back at about 3pm.

We stayed in Maison's Latiffe for two nights without any hitches I might add and then headed off for a long drive to get as far as we could but still be comfortable. We drove for about 4 hours (France is bloomin' huge!) but did stop a couple of times to break it up for lunch and fuel and to take a photo of this sign that made us laugh a bit... 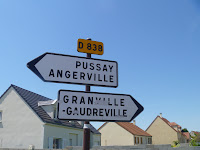 We are now camping in Argenton sur Creuse which is a lovely site which backs on to a calm river which turns into a raging and current filled river of death half way down which is interesting to watch but needless to stay the kayak is staying in the cupboard another night! This campsite is the first to provide free wifi which is why we haven't been replying to anyone and haven't blogged up until now. Tomorrow we are going to head off again as we want to get as close to Bordeaux as we can but don't want to get uncomfortable so we have a few campsites that are long haul and short haul distances away so the options are endless! We have met a lovely couple on this campsite (Dom and Jill) who are also in a Mercedes Sprinter!!! So... HI DOM AND JILL!

Right, we are off to go do traveller things now!
We will keep you posted if anything exciting comes up :)