Hello Hello!
It has been five days since our last post and bliiiiiimey have we been moving! We are currently sat in Bert the Merc in St Jean-De-Luz on a lovely campsite which backs onto Erromardie beach! It is beautiful here and we have been on the beach all day, sunbathing and paddling :) its a bit rocky here but we don't mind at all! It has been beautifully sunny today and yesterday (hence the name of the blog... Steven is looking rather pink but hey that's what after sun is for right?!) and we welcomed it, as did everyone else in France as the three days before were overcast and even a bit wet!!! I'm pretty sure we were blamed for bringing English weather with us but now its sunny again the smiles have returned- Phew!

To be honest the first day of overcast weather was welcomed as that was the day we travelled from Argenton sur Creuse to an English run camp site in St. Foy-la-Grande which is on the banks of the Dordogne and was about five hours of being on the road. I can tell you now that it was not worth it. The campsite itself was nice enough but the 'scenic' and 'picturesque' local village was...not. Plus there was very very very little there so we only stayed one night. We did, however, make friends with a black Labrador puppy.

After a wet and underwhelming night here we headed on towards Bordeaux and ended up on a campsite which was in a massive pine tree forest and linked to the Pilat Dunes, this was really cool and felt very private and wild! As it was mild we were able to walk all the way to the top of the dunes... this sounds like a small achievement but do not judge until you have at least googled these dunes or actually walked up them. It was like a mountain. A small mountain but still a mountain all the same.

At this awesome campsite there was opportunity to go paragliding off of the dunes which looked amazing and loads of people were doing it so we had to adjust to the sight of paragliders passing Bert the Merc throughout the day quite quickly! When we were climbing down the dunes a certain paraglider started to drop near the sand and someones German Shepherd thought that this was a FANTASTIC game and was sprinting toward this mans dangling legs and jumping up to try and catch him... this dog could jump pretty high too! (I do know a special dog who can jump a bit higher though !)  Luckily the man did get away without the dog in tow but it was a very funny scene to watch! 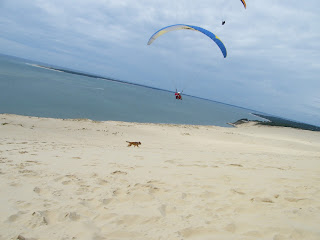 Nevertheless, we were on a mission and even though this campsite was nice, it wasn't perfect (we wanted beach, sun and a nice campsite!) so we continued our hunt for the perfect campsite for us and Bert the Merc :) so we headed to Biarritz!

The campsite we stayed on last night was in Bidart which is a few kilometres from Biaritz but promised a good beach just across the road! This was not a lie and the beach was gorgeous! But due to the wet weather and the nature of the campsite (on a hill) it meant that parking Bert the Merc was a bit of a palaver and we kind of slept on the wonk so we wanted to move on and see if some of the other campsites in the area were any better! We drove through Biarritz and even though it looked brilliant and we desperately wanted to set up camp and go explore ( we saw this cove-y bit which was over the sea and you could walk to on a rope bridge thing which looked amazing!) but it became painfully apparent that Biaritz was not camper friendly. At all. there was height barriers, and signs to say that campers could not park here, there and everywhere, and no campsites anywhere near Biarritz- the closest one we found via the satnav was 4km away and that wasn't 4km away from the centre, it was 4km away from the aire we found which wasn't close to the beach or centre :( it was gutting. However (!) we have put it on our 'holiday' list as we definitely want to go there as it does look cracking and beautiful but unfortunately Bert the Merc and the like, couldn't fit anywhere and weren't exactly welcome. So we had to find an alternative!

So here we are in St. Jean-de-Luz! And we love it! The campsite is lovely and cosy and FLAT(!) and the lady who runs it is so friendly! The other campers seem really nice too and the facilities have recently been refurbished. It literally backs on to the beach! We have booked ourselves in for three nights which will be the longest amount of time we have spent at one place since we left home! We were sunbathing today and even though Steven 'never burns' he is nice and pink! I did put factor 30 on him as I know he does in fact burn but apparently that sun wanted him good and proper. We are going to go surfing tomorrow and possibly venture out on the kayak! We also had our first BBQ tonight! You are probably wondering why we haven't been having these everyday since we left but it hasn't seemed right yet, but tonight was the night, kebabs, sausages and the trusty potato salad! And, of course, finished with Marshmallows!!! Yumyumyum!

Just wanted to give a shout out to the birthday girl, a wonderful Mum and beautiful lady- Happy Birthday Mum/Jo! Hope you have a G&T from us!

Much love to all and Happy Camping!!