Hola from Spain!
Yes it is true- we have crossed another border! Took us a while to figure out that we had in fact crossed the border as there is no 'WELCOME TO SPAIN' sign... the language and the font on signs just changed slightly and then its Hola Chica's and Au Revoir Madame's!

But hang on, I feel we have skipped a few steps so lets go back to our last blog and go from there :)
So... we were at the lovely campsite near St. Jean-De-Luz and we stayed there for a whopping 5 nights! As the first three nights were so good that we weren't ready to leave yet! Throughout our stay at St. Jean-De-Luz we did venture out in the kayak! Our first time!! In the sea....when the tide was coming in.... It was brilliant! We managed to mount the kayak successfully- with water, sun lotion and camera in tow (the waterproof one) and paddled out together, in sync and perfect harmony.... and then the waves came. I swear it had been flat as a pancake the whole day which is why we decided to give the kayak a go and as soon as we were out of the shallows it picked up. A lot. We were doing pretty well with hitting the waves head on and Emily was starting to accept that, no, this was not going to be one of those kayak experiences when only her ankles get wet. She was drenched. Steven, as ever, was uber supportive and caring, and decided the best thing to do when the waves hit us head on was to duck behind Em so that he only got a tad damp. So, there we were having a nice kayak and paddle, we saw that there were less big waves coming our way so decided to kayak to the side instead of head toward the horizon as we didnt want to go too far out. It was going really well until a huge huge huge wave started to form so we quickly started paddling on the right so that the kayak and us faced the beach- hoping that we could 'ride' the wave a bit as it was too big to face head on. This was insane! So much fun and we did manage to catch it for a bit- making sure that we stayed straight.
Which became more and more difficult the more we stayed with the wave. To the point which we were no longer straight but more to the left. So much so that, yes you guessed it, ooooover we went. It happened so fast! We were both under and when we surfaced Em had hold of the kayak (brownie points for her) and she still had her sunglasses on somehow! And we each had our own oars. But the waves were still coming so we had to wait it out a bit in the depths until Steven found a rock to stand on so he could steady the kayak as Em got back in it and then he followed.
Well. after that we paddled for a bit but the water in the kayak was getting a bit much so we headed for shore. considering the ease of which we got in the sea we thought it would be a doddle. This was not the case. After many falling overs on Emily's behalf and Steven losing the will to live, we got out, and we got the water out of the kayak, and we walked back to Bert the Merc. This whole escapade happened in less than an hour. We are still so keen to get back out there but only in less wavey conditions and maybe we wont go fully clothed and we will leave Ems bag with Bert... But next time maybe we will be less preoccupied in order for us to actually take some photos! :(

In those five days at St. Jean-De-Luz we also went for bike rides most days and bike rode into the centre of St. Jean- De- Luz which was beautiful and we would definitely go back there as the beach was sandy and smooth and didnt have loads of huge rocks and boulders hidden in it so definitely worth a visit! We had our first meal out too- Pizzaaaaa yum yum yum! And we had a look around the shops. It wasnt warm enough for ice cream so Steven just had a waffle filling with Nuttela and then we cycled home again :)

On the day we left St. Jean-De-Luz we had rain which was fine as we were just driving to Orio- in Spain! When we got there is was cloudy but not wet so we had a look round. The campsite we stayed on was a few minutes walk to the beach and was lovely- the best beach we have seen so far we reckon. As it was lovely and sandy but the waves were big too! We messed around on the beach and saw how close we could get (fully clothed) before we got soaked taking equal steps at a time. Hehehehe! There is also a hilly area which linked to the beach which we walked up which was very steep but led to some amazing views and as it was mild and overcast it was a nice walk! But unfortunately the weather only worsened and it started chucking it down. We only stayed in Orio for the one night as we feel there is no point sitting inside Bert the Merc doing nothing but paying for it. So we headed off again in the morning.

We were initially heading for Pamplona way as we wanted to check that out but the whole day was thunderstorm full so we stopped at a petrol station and had our lunch and then re-evaluated our plan which resulted in us going full whack. Another three hours driving and then settle. We ended up in Solsona which is where we are blogging from! Very nice area and lovely people but it is just a one night stop as the weather is still rubbish and we want to be proactive! The drive here though was incredible though! We drove through the Pyrenees, practically through the clouds sometimes! And the tunnels they have through the mountains are so weird. But so cool- we went though one which was about a mile long! under a mountain! We also got to see thunderstorms build and release over the mountains while we were driving and went around a beautiful reservoir which was more green than blue, with trees and boats in! We stopped and took a few pics so here they are :) This reservoir is known as the Sea of the Pyrenees.

We also saw this bridge which, as you can see, has some vital aspects of it, missing!

So here we are in Sol Sona, trying to plan our next stop which we think will be...BARCELONAAA. Which we are very excited about! Unfortunately, we think that we will have to leave most of Spain to another time as we want to be able to spend four to seven days in one place and really set up camp instead of staying in many places for just one or two nights. So we are going to head to the East Coast and Med after Barcelona! And tan our English bodies.

No rude pics this time but loads of info and here is a pic of where we have stayed so far :) 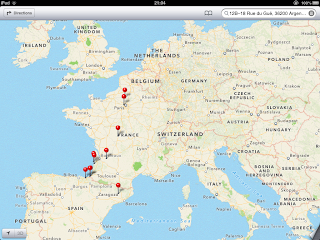 Much love and Happy Camping


P.S. Thunder and lightning have found us once again! Ah the joys of European thunderstorms!